Heavy metal toxicity is a serious problem, but there are few solutions available.

Most people don’t know they have heavy metal toxicity and those who do often struggle to find effective solutions.

ROOT Brands offers the best all-natural solution for heavy metal toxicity, so they’re safe to use on your body without any harmful side effects.

Inside the formulated detox supplement, you will find charcoal, bentonite clay, zeolite powder, activated charcoal and more. These are some of nature’s most powerful detoxifying agents used by ancient cultures for centuries to improve health and increase longevity!

Removes heavy metals + other environmental toxins from the body

Improves the supply of oxygen + powerful detox agent against viruses, bacteria, and other pathogens, and environmental toxins

A holistic approach to health & wellness that takes a ‘Root level approach.

Ready to start removing the heavy metals from your body and decalcify your pineal gland NOW?

There is no better way to eliminate your toxin load + live a long, healthy and happy life…

Learn how Clean Slate & Zero-In can change your life + help you feel AMAZING!

I have had a long history of heavy metal toxin exposure from working as a Boilermaker and before that a Steel worker.

This had caused me to suffer from a nasty type of peripheral neuropathic/nerve pain for many years and it was something I could not see getting better, in fact it was only getting worse.

But after one month of detox, using a specially formulated zeolite based detox drops solution I can now say that my pain is 95% gone!

And I have more for you than just a first hand report based on my subjective experience, have collected scientific data by doing three urine analysis lab tests to detect what was getting excreted through this detox process. And just wow… the progress I made over three subsequent tests made through the course of not even a month is remarkable to say the least. 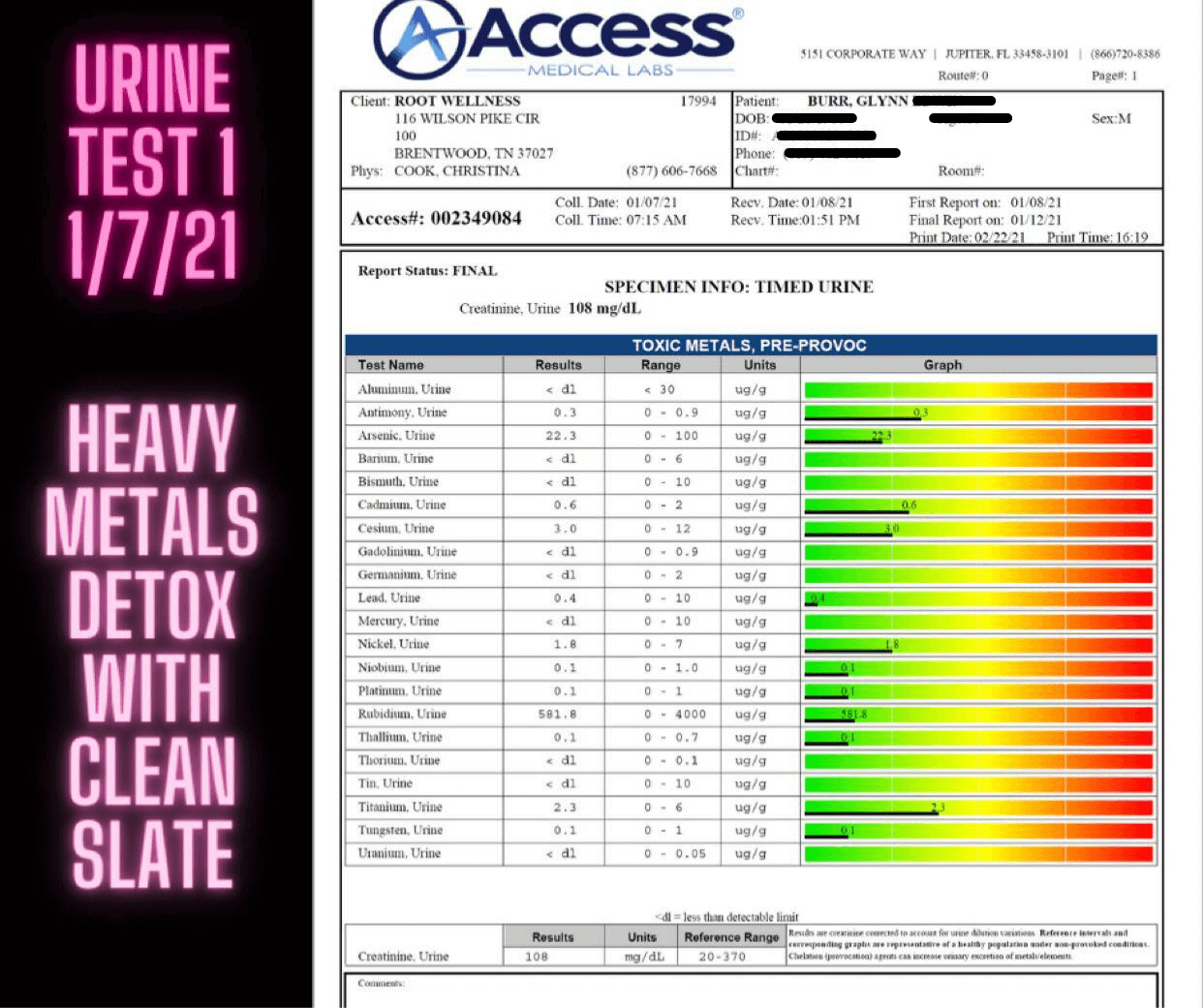 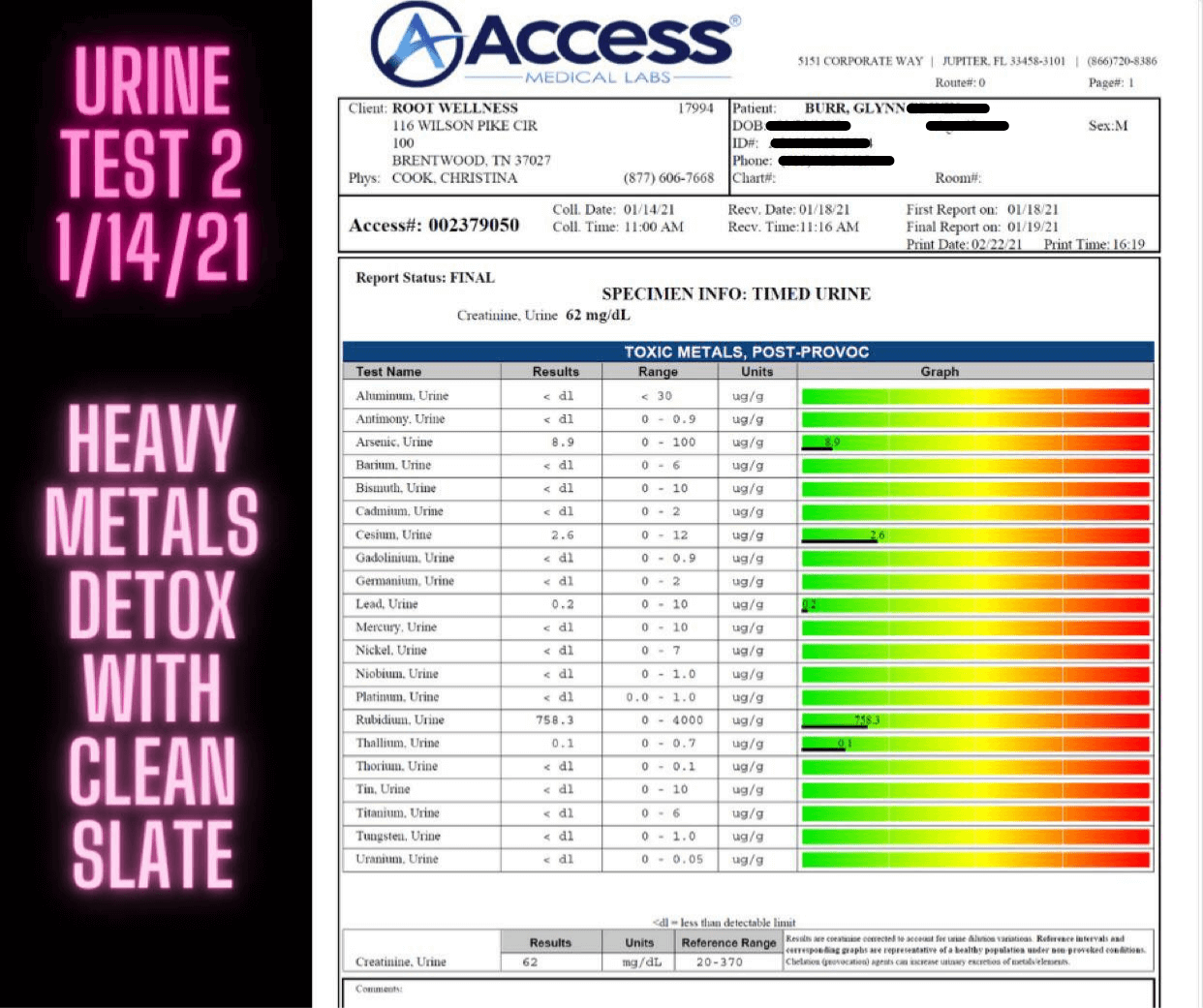 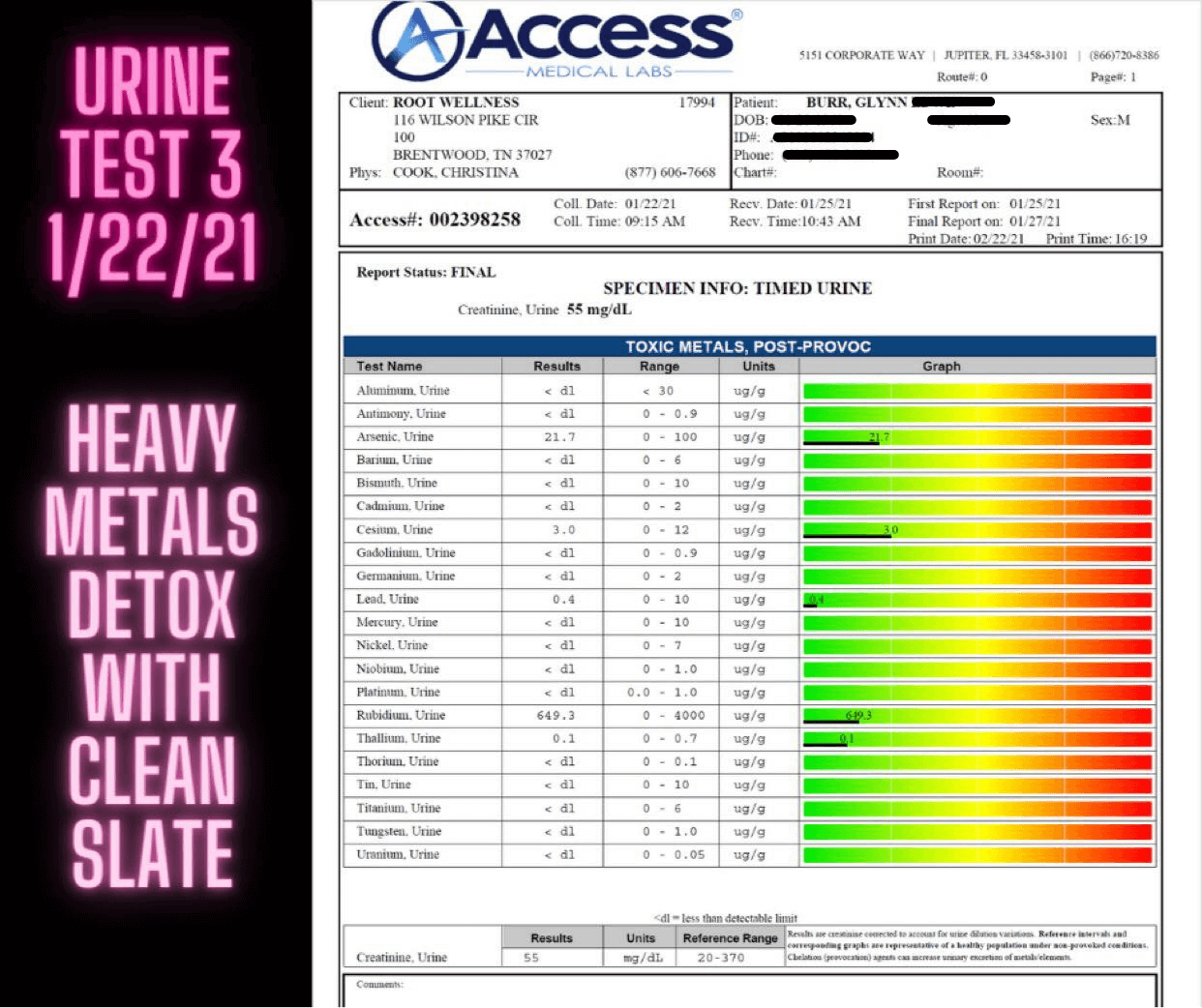 The Results Of People I Have Personally Helped With The ROOT Regimen:

1)  My Dad has been suffering from symptoms of pre-diabetes and non-alcohol-based fatty liver disease.  In just about two months’ time and only going up to a mere three drops twice per day, he has almost fully recovered from the various symptoms he had been suffering from.  His sleep was not good, and that has totally changed for him and his sleep is now better than ever.  His body had sores developing on it, specifically appearing on his head, which was the signs of pre-diabetes and fatty liver disease.

These sores have all but disappeared, very soon they will be completely gone.  His energy is better than I have seen it be in a long time.  His thinking is indeed clearer and he is being far more efficient with his time… this has helped his mental processes in remarkable ways, I have been observing him get his life together in areas where he was previously struggling.  He is even looking younger than ever!

He has commented to me, that it’s been the first time in a long time, where his body and mind have not literally felt like death, and other friends and family are noticing the remarkable differences in him and are developing an interest to try Clean Slate themselves, because the truth is, there is an uncountable number of people who need this solution.  Try the whole human population of the world, whatever that number may be.  We have all been exposed to various environmental toxins through air, water, food, vaccines, and more.

2)  My Mom was experiencing a really low quality of sleep.  She commented to me that she felt like whenever she would go to sleep, it felt like she was instantly waking up the next day with no energy or feelings of restoration.  Within about a week of taking the Clean Slate drops, she reported back to me getting better sleep than she has had in a long time.  And she is experiencing dreams, whereas before, her sleep was short and dreamless.  Sleep is extremely important to the human body’s regenerative processes!  As a result, I have personally observed that she is no longer looking  ‘tired’ on average and looks like she is younger as a result!

3)  My sister has suffered from Lyme disease for many years.  Clean Slate has helped to eliminate her symptoms.  I am curious to see with further blood tests if the Lyme’s is completely eliminated.  But she is not the first person with Lyme’s to experience excellent results of relief.

4)  I have a friend with Multiple Sclerosis who has not been able to walk in many years… until Clean Slate entered his life.  About 2 weeks into using Clean Slate to detox, my friend Brad has regained his ability to walk, and his thinking processes are also speeding up [another area that MS affects is thinking speed/speech.]  I consider this to be one of the most meaningful things I have done for someone, in helping him to get started with this health regimen which is changing his life.  And even his own homeopath has been asking him what he’s been doing because she is noticing a big difference!

5) An Australian friend of mine from Brisbane, who has been previously diagnosed with severe heavy metal toxicity/poisoning has been experiencing a powerful relief of her usual daily debilitating symptoms that have previously made it extremely difficult for her to function in life.

6) I have a friend who has had his mercury amalgam fillings removed, which caused major toxicity leakage into his body.  Clean Slate has helped him to recover from that.  Another friend who still has the amalgam fillings in his mouth has been using this detox drop solution for 15+ years [Clayton], as a testament [proof] to the power and efficacy of this product.

I have many more examples of people I have helped with this health regimen, this just scratches the surface for you to get an idea!

My The ROOT Brands Review in conclusion:

Based on my own personal experience and the results of people that I have been helping with this unparalleled health regimen… I completely approve of everything happening here, and consider it to be one of the most valuable discoveries I’ve ever made in regard to my passion for pro-active health strategies… and beyond that, something that gives not only myself the chance to live a long healthy life, but gives me the chance to help and even save the lives of other people who are suffering.

I highly recommend that you not only continue to dig in and learn about The ROOT Brands company and products.  But do something for yourself and open your mind to this health regimen, which in turn can set you up to be able to help your friends and family.

I believe that something we all have in common, is a need, want, and desire to keep those that we love around for as long as possible, and we finally have a way to ensure the long-term viability of our body’s health.  And all under one umbrella with the simple but powerful science-based approach to optimal health, by The ROOT Brands company.

Try ROOT Today
Back To Top